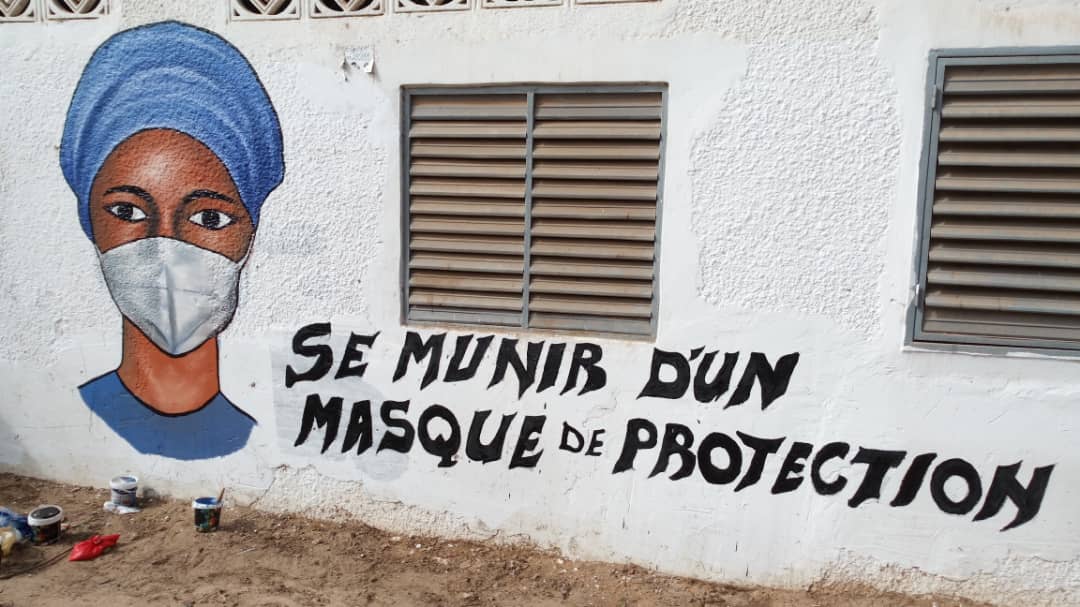 How far have we come with the StopCoronavirus Campaign? We broke up with the progress report of the project in mid-April, when the arrival of new funds from the Municipality of Pino Torinese allowed us to inaugurate the second phase of work and to structure the interventions in a more widespread and articulated way . If from 15 March to 15 of the following month, space was given mainly to prevention and disclosurethe risks of the pandemic door to door, thanks to the help of the volunteers present in Dakar and Gambia, from that date onwards it has been possible to expand in a greater number of villages and also in public structures, distributing not only gloves, masks and soaps, bleach and dispensers, but infrared thermometers and food packages. The awareness actions then continued both in the traditional form (house by house) and with means designed to impact large sections of the population, that is by renting vans with speakers or using the communicative scope of ad hoc murals.

Retracing the salient stages of the cycle of operations: from April 17, several stations for hand disinfection have been installed in the streets of Bandoulou, Ndiandiane and Tattaguine and in the Poste de santé (surgeries) of Pikine Est, Fissel and Ndiandiane (Senegal) . On the outskirts of Dakar the bins were also placed in a daara (Koranic school) and in the local market. The medical devices , as mentioned earlier, have received – both in towns and rural areas – the necessary quantities of antiseptic and THERMOFLASH gel to measure the distance fever. Finally, in July, the arrival of an additional 3000 euros, also from the Municipality of Pino Torinese, for the purchase of tools to be equipped with schoolsto protect children and teachers when they return to the classroom.
On the prevention front, between pick-up equipped with amplifiers and the assembly of stands to distribute informative material, both of which could explain how to defend yourself from the virus – starting from April 24 and going on for about two weeks – it was possible to get in touch with a substantial number of inhabitants of Pikine. The wall paintings made by Modou throughout the whole of May and in several parts of the city, on the other hand, had the function of demonstrating, with simple and easy to read images, the hygiene rules to be followed, for example how to use a mask or how to maintain physical distance between people.
In this phase, a new, important step was added: some families were identified that the lockdown was forcing into a state of extreme poverty. To date, foodstuffs capable of supporting them have been delivered , and aid will continue until at least September.

To conclude, studies and preparations have been underway for about a month to resume microcredit and aid to the local economy. The Phase 3 StopCoronavirus , as mentioned here , focuses on women entrepreneurship raise, by providing small loans (100/200 Euros), without interest, to those who submit sustainable ideas and interest for the community. In the autumn, trips will be restarted to implement the training and professional start-up processes. The goal, then, would be to support Pikine’s network of women thanks to the opening of an emporium in situand promoting their products in Italy. We will keep you updated along the way, and anyone who wants to contribute, with ideas, donations or just giving a hand, is welcome!

LATEST FROM SENEGAL: THE DISEASE TREND AND THE REOPENINGS IN THE COUNTRY
Before saying goodbye we leave you some general information on the progress of the situation in Senegal, both social and health.
The state of emergency, decreed on 23 March, was abolished, including a curfew, on 30 June at 11 pm. From 15 July, the air borders to and from a limited number of countries reopened, according to the health protocol; while land and sea borders are still closed. The obligation to wear masks continues in all public places. As of June 29, 6698 total cases of coronavirus were reported, of which 4341 recovered, 108 dead and 2248 still in treatment, for a total of 78338 tests. That is, few, if we consider that in Italy, in the moments of greatest control, these swabs were processed in one day. The mortality rate in the country is 1.5%. On average in Africa it is 2.5%; in the rest of the world 5.2%. The regions most affected are those of Dakar, Diourbel and Thies, which possess 92% of the cases.
The lockdown ended on 12 May and phase 2 of partial easing of the restrictive measures began. The curfew was initially from 20 to 6; now it has become from 9 to 5 in the morning. Markets, commercial activities, even places of worship have been reopened with physical distancing measures.
On an economic level, GDP, which should have increased by 6.8% in 2020 (data are discordant; some states speak of recession) is expected to grow by only 1.1%. On the public health front, the government wants to open 33 Covid centers between 2020 and 2021, to hire 500 doctors and 1000 nurses, on a national basis.

CONCLUSIONS
Although the areas of our intervention are among the most affected, in the families in which we have directly intervened with disclosure and prophylaxis, there have not yet been cases of illness. The process of defeating the coronavirus, however, is far from over. We therefore invite you to continue to follow the progress of the campaign on the Facebook page of Energia . For those who need more information about the steps ahead, they can contact the manager of phase 3 of the project at the email info@energiaperidirittiumani.it . For donations or support, our IBAN is: IT35S0501803200000011082344 (Banca Etica, Rome agency)

Without you we would never have made it.