Stop Coronavirus: the numbers of the first phase 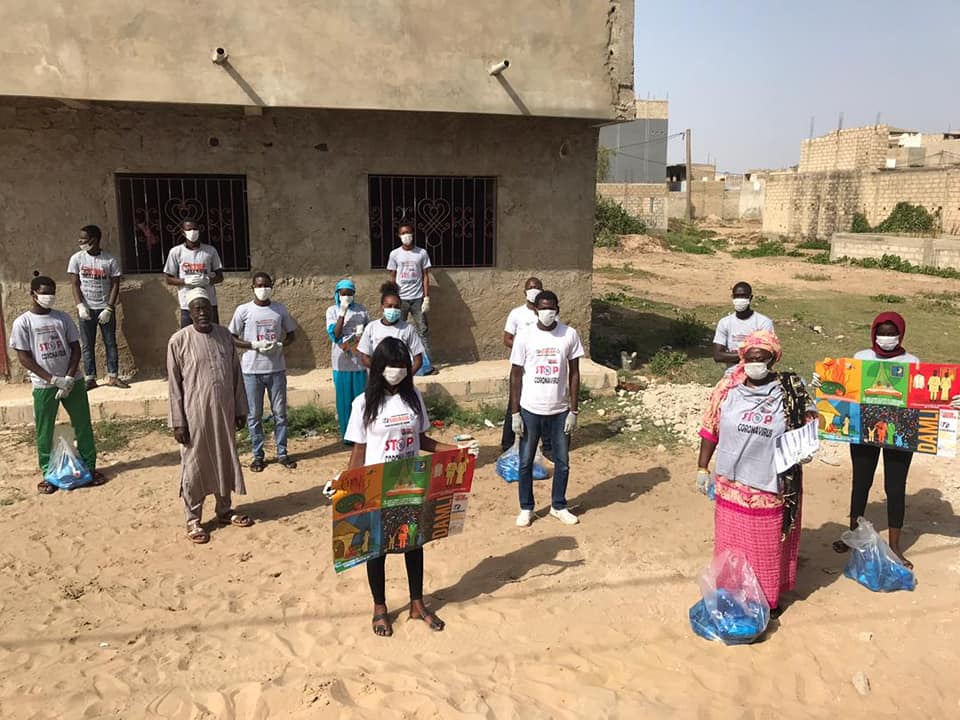 Covid-19 has also arrived in Senegal and Gambia. Energy for Human Rights, together with partner associations and local volunteers, transformed the Stop Malaria project, which it was supporting in the two countries with the help of the Universal Civil Service, into the Stop Coronavirus Campaign, to prevent the spread of the pandemic and contingent on the impact on the economic and social fabric.

THE TIMES
After the initial cases of Egypt, Algeria and Nigeria (respectively 14, 25 and 27 February), Senegal is the second center of sub-Saharan Africa to be affected by the virus. The first positive patient is confirmed on March 2 and not even two weeks have passed since the patients are over twenty. On the 14th several limitations were introduced : the prohibition, for a period of 30 days, of all public events on the national territory; the strengthening of health checks at land, air and sea borders; the closure of schools and universities, until April 6th. On the 23rd the state of emergency was announced (reconfirmed and extended for another month on April 3rd): curfew from 20 to 6 in the morning; interruption of any activity except food and pharmacies; prohibition to leave your municipality … with the army alerted to enforce the decree. In the meantime, the symptoms that developed the coronavirus rise to 207. The Gambia instead maintains stable numbers – on 3/4 people – until April 11, when there is a leap of 5 units (consider that the tested are overall 298 ), but quickly introduces containment measures: from the blockade of borders, to the forced stop of non-essential commercial establishments, to the impediment of gatherings, including on public transport. Despite the sudden response of the two governments , however, there are many perplexities: the lack of information on the real risks of the pandemic among the population is one of the main problems that need to be addressed. Add to this the already precarious economic conditions, which force most of the inhabitants to have no choice between going out on the street to remedy a “hot” meal and staying at home; the lack of hygienic and social norms to prevent the spread of pathogens … up to the most basic deficiencies, such as water to rinse your hands.

In the escalation of infected and precautionary vetoes, the decision to convert the campaign back to StopCoronavirus comes to life on March 15 . After a period dedicated to reorganization, and focused on raising awareness (mainly via the web), on the 27th the first 3000 bottles of varechina reach Keur Marietou, Pikine , for cleaning and disinfection. On the 28th, also with the support of People for Change, 50 bins with tap , containing water and bleach, are ready to be installed in the streets of the villages of Ballanghar, Kauur and Gengjie (Gambia): each element is accompanied by a leaflet that illustrates the functions. On the 29th the project is officially inaugurated: door-to-door distribution of personal protection kits (masks, gloves, soap) and information material to explain how to defend yourself from the virus. Over 500 families met, for 30 volunteers, at one time. 29 is also the day when fundraising is launched to make the actions even more widespread and incisive; the goal is 2000 euros. Finally, we continue between the houses on 5 April in Yeumbel and 13 in Keur Massar – with the help of nurses and with the addition of questionnaires, to understand how best to adapt the indications to be provided – and 11, with the arrival additional 20 tanks 100 liters to be distributed between Pikine Est (Dakar) and the rural areas of Sossop, Ndiandiane, Tattaguine and Bandoulou, in hospitals, community health centers, public offices and on the street.

AFRICA About the
real difficulty in calculating the infections and the insufficiency of the local health service to face the pandemic, we briefly mentioned the launch of StopCoronavirus : the laboratories are not equipped to process an optimal number of swabs; intensive care beds are laughable. Not only that: there are no minimum safety standards between the same medical staff (starting with gloves and masks). Oumar Khassimou Dia tells it, vice president of Énergie pour les Droits de l’Homme Sénégal, and our partner in the Campaign. So: on the one hand we are faced with restrictions put in place by governments that surprise for timeliness and resoluteness (countries are well prepared for emergencies, history teaches it); on the other, to an effective inconsistency of means, which, if Covid-19 were to spread in the same way as Europe, would overwhelm entire communities without efforts. One possible answer to slow down the impact of the disease is to work from below, in contact with populations, sharing lessons on how to behave, which hygiene and spacing systems to adopt, providing them with essential tools to protect themselves. We reiterate: it is fundamental to make people understand that the virus exists and is dangerous. And it is not (exclusively) African atavistic fatalism; the scarcity of news, of disclosure (we have already said it), is the main obstacle to overcome, as well as the intentional mystifications of some groups ( Top cleric declares coronavirus immunity of faithful , writes africanews.com ).

As for the number of infections, 15,000 were exceeded in the entire continent; today (April 16, 2020) there are 335 in Senegal, in Gambia 9. The prospects , however, still leave us uncertain . When to expect the wave? Has it been blocked in time or is it just a matter of waiting for that initial gap of a few weeks of delay to be filled? Is there a possibility that the different climate and the distance between urban centers will attenuate their propagation? How will the bodies react? We are facing the youngest inhabitants of the planet. But with a very high incidence of diseases (HIV, malaria, tuberculosis). We can hope for trained immunityor compromised immune systems, subjected to constant malnutrition, will do the rest? The questions are still open; what is certain is that the coronavirus will leave people on their knees, if not physically, at least economically.

THE CAMPAIGN
On April 15, StopCovid phase 1 ended. It was decided to articulate the Campaign into 3 parts, initially focusing on awareness raising; subsequently introducing measures capable of restoring impetus to the already fragile employment fabric, setting in motion resources to raise the meager domestic budgets.
The funds raised during the past month ( March 15 – April 15 ) were used to purchase and distribute masks, gloves, sterilizers, tanks for dispensing hydro-alcoholic solutions and soap for free among the population(remember that we are in countries where not only can they run out of money to buy the bare minimum for subsistence, but they may even lack access to water). Starting from the urban areas of Pikine, Yeumbel (Dakar), Keur Massar in Senegal, and the villages of Ballanghar, Genjie and Kauur in Gambia in the North River Region, the actions gradually extended towards the rural areas of Ndiadiane, Sossop, Tattaguine and Bandoulou, always in Senegal. We spoke at the opening of the door-to-door conducted by the volunteers (to which the nurses joined): their effort was to disseminate useful data and information; explain – by distributing the kits – the correct functioning of the protective instruments and the hygiene and social standards to be adopted. In just over two weeks, over 2000 people were reached, thanks to about 50 activists and health promoters. To this was added the installation of bins for washing hands (70 in total), in the streets of greatest passage, in clinics, and in public offices.

Yesterday, with the additional contribution of 5000 euros from the Municipality of Pino Torinese for the 2020 cooperation project, which are added to those collected through crowdfunding on Facebook , the second phase of the Campaign was inaugurated (April 15 – May 30, 2020). The assignment of individual safeguard devices continues, but together with the local communities, the beneficiaries are also the hospitals of Dakar and the other 5 small centers. Medical facilities need the most basic equipment, and are starting to be equipped not only with gloves, gels and masks, but with thermoflash thermometers and 100-liter tanks. The ability to contact an increasing number of inhabitants is also strengthened: together with the house-to-house, awareness now passes through a traveling caravan equipped with megaphones, in the districts of Dakar and Pikine.

The Phase 3 StopCoronavirus (June 1, 2020 – June 1, 2021), focuses on economic development: the total blockade of the activities and the state of emergency are severely affecting the already compromised management of the (few) resources available. Africa is expected to experience a severe recession , losing between 2.1% and 5.1% of GDP. To mitigate the consequences of the pandemic on different realities, microcredit plans will be set in motion, to provide small loans (100/200 euros), without interest, to groups of women who will submit sustainable ideas of interest to the community.

A side note: in addition to local partners and volunteers, 20 people are helping from Italy , divided into 4 working groups: Communication; Graphics; Fundraising; Prevention.
In Senegal and Gambia we are relying on health promoters who were already defined and trained for Stop Malaria. For the moment, India has no need for material for care and hygiene, but it may be necessary, in the near future, to support the functioning of the Home where about 90 children are housed. With forced closure, the problem arises of maintaining the centers without any economic income. The same goes for Keur Marietou, with 26 teachers, cooks, janitors and assistants who live from the school, and who will remain locked for another month for now.

CONCLUSIONS
If you have come this far, it is because you are aware that your contribution is precious; that we can all do something. Who can give, who cannot help tell the campaign to as many people as possible. Only in this way can we make a difference.

Also, stay tuned … we will continue to update you on the progress of StopCoronavirus both on the Facebook page , and on the websites https://www.sostegnoadistanza.eu/modulo/home/ and energiaperidirittiumani.it .