A Delegation from P. Torinese and Chieri in Senegal 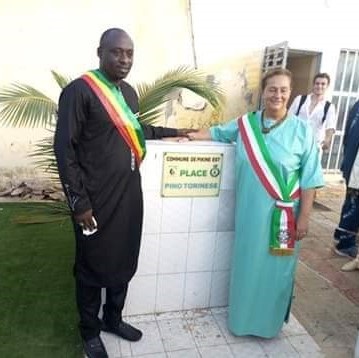 “ Toubab !, Toubab”. These words followed by the warm embrace of a bunch of children, are the first greeting that the Pinese delegation receives just arrived in Pikine Est. The Italian visitors are a heterogeneous group formed by the Mayor Alessandra Tosi, by Anna, referent of the project, by five young people of the youth consultation of Pinese, by four basketball and volleyball coaches and by three friends from the city of Chieri. Their journey is the final phase of the second year of the project which sees the municipalities of Pino Torinese and Pikine Est linked by a partnership relationship, as part of a decentralized cooperation project funded by the Piedmont Region. In the first year of this process, the municipality of Pino Torinese had joined the Senegalese counterpart mainly in the creation of the local library. The relationship between the two communities has become, then, with the ever narrower time and led, in the second year of the project, to the choice of financing the construction of a multifunctional sports plate, located in the courtyard of one of the schools of Pikine. Indeed, the theme of sport was in fact one of the focal points of the mission of the Pinese delegation in Senegal, which, among its objectives, set itself the training of a group of local sports animators, who could, later on, , propose sports activities for the neighborhood children.

The activities of the sports project were also intertwined with those relating to the second purpose of the mission, concerning the theme of waste. The purpose that the Pinese delegation set itself was a feasibility study with a view to creating a start-up that would deal with the recycling of plastic in Pikine.

Therefore, while on the multifunctional plate, children and entertainers, Italians and Senegalese, learned from each other to get to know each other and discovered that with a ball in hand they were able to overcome all the differences and understand each other despite not speaking the same language, some members of the Delegation, accompanied by members of the Pikine municipal administration, tried to approach the complicated issue of waste management in Pikine and in general in the Dakar region. The first stop on this route was a visit to the Malika landfill, the largest landfill in West Africa. This visit was followed by numerous meetings, in order to get to know and deepen the problem as much as possible and to meet the various realities that deal with this topic in the area.

Finally, the third soul of the project was related to the knowledge of Pikinese reality in general, through a nice moment of meeting and exchange with some young people of the city, and, in particular, of the activities carried out by Energy for Human Rights: the young people of the In fact, the delegation had the opportunity to participate in some moments of the lessons of the kindergarten at Keur Marietou, to meet the women who deal with the processing of cereals and tailoring and to attend the literacy course for women and computer lessons .

Finally, an important part of the experience lived in Senegal was the opportunity to visit some places in the surrounding area: realities very different from Pikine, but somehow interconnected to it. Visiting the villages, first of all, helped to understand where the many internal migrants who flock to the urban suburbs of Dakar come from, while seeing Goree and some areas of the center of Dakar itself has allowed us to reflect on the profound contradictions and the different development speeds that live this country.